Throughout the 95-year history of the Boston Bruins franchise, there have been 11 different instances of a player reaching the 50-goal mark. Those 11 instances of 50-plus goals are made up of five different players who will forever live in Bruins’ history as legends. Interestingly enough, the 11 different 50-plus goals seasons all came within a span of 24 years between 1970 and 1994 without any player in Bruins’ history reaching the 50-goal mark prior to the 1970-71 season or since the 1993-94 season. 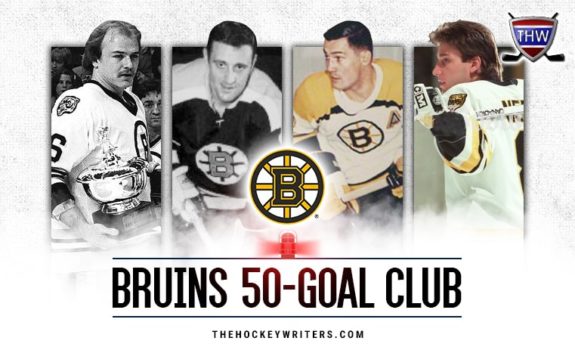 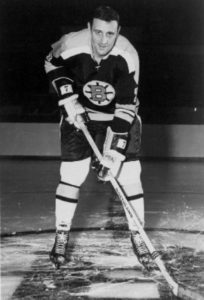 NHL Hall of Fame forward Phil Esposito as a member of the Boston Bruins. By Boston Bruins (eBay front back) (Public domain), via Wikimedia Commons

The 1970-71 season not only saw the Bruins first 50-goal scorer, but it saw the team’s first two 50-goal scorers as Esposito would crack the mark first and eventually score an astounding 76 goals in just 78 games. The second player to do so, who will be mentioned later on in more detail, was the “Chief” Johnny Bucyk.

Esposito’s 1970-71 season did more than just mark the first time a Bruins’ player would reach the 50-goal mark. He would also set the all-time goals-scored record in a single season with his 76 tallies, a mark that would only be broken over a decade later when Wayne Gretzky would score a hat trick to record his 77th, 78th and 79th goals in the 1981-82 season.

Esposito would also set the single-season point-scoring record at the time with 152 points before Gretzky would eventually set the new mark with 215 points in 1985-86.

In the history of the NHL, only five players have ever scored 150 points or more: Esposito, Gretzky, Mario Lemieux, Steve Yzerman and Bernie Nicholls. Only Gretzky, Lemieux, Esposito, Teemu Selanne and Alexander Mogilny would score 76 goals or more in a single season.

He’d have continued success with another 184 goals in 422 games in New York but he’d never quite reach the 50-goal mark again.

Few players are more synonymous with the Bruins franchise as the “Chief” Johnny Bucyk. Though he started his career with the Detroit Red Wings for his first season and a half of play, there’s no denying that Bucyk is and always will be a Bruins through and through. 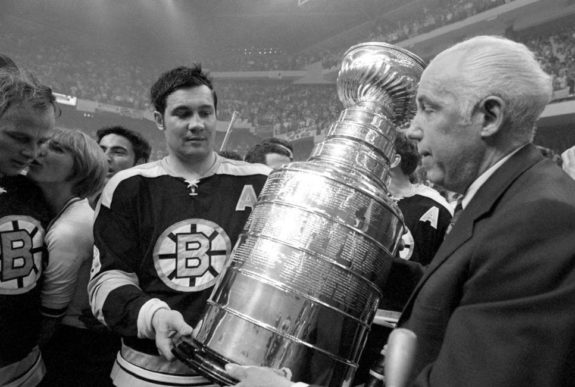 This was the only time in Bucyk’s career that he’d score 50 goals, making him just the second member of the Bruins in history to do so as Esposito had done so earlier in that very same season.

Prior to Bucyk and Esposito reaching the mark, only Maurice Richard and Bernie Geoffrion of the Montreal Canadiens as well as Bobby Hull (four times) of the Chicago Blackhawks had reached the 50-goal mark in NHL history.

When Ken Hodge played for the Chicago Blackhawks from 1964 until 1967, he scored a grand total of 16 goals and 57 points in 132 games. When the Bruins and Blackhawks made a blockbuster trade that saw Esposito, Hodge and Fred Stanfield sent to Boston in exchange for Jack Norris, Pit Martin and Gilles Marotte, the Blackhawks actually felt they pulled one over on the Bruins. 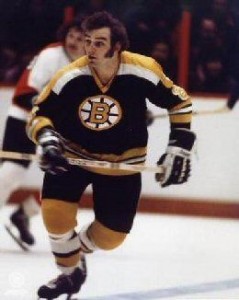 As history would have it, however, the Bruins won the trade with the acquisition of Esposito alone. Adding in Stanfield and Hodge just made it even more clear that the Bruins came out like the bandits in this deal.

This was even more apparent when considering the fact that Norris played in just 10 games for the Blackhawks (allowing 32 goals) and Marotte would play in two-plus seasons in Chicago. Martin actually had a successful run with the Blackhawks but it paled in comparison to the acquisitions Boston made.

Though Hodge would score 105 points twice in his career, the best instance of this came in 1973-74 when he’d score a career-high 50 goals, making him just the third different Bruins to qualify for the 50-Goal Club.

It’s safe to say that the trade that saw Esposito and Hodge (two of the members of this illustrious club) shipped to Boston played a big role in shaping a franchise that would be one of the most dominant in the entire NHL in the early 1970s.

The Bruins would later trade Hodge in a one-for-one deal for the next player on this list.

During his time in Boston, Middleton would score a very impressive 402 goals and 898 points in just 881 games. He would become one of the best players in the history of the Bruins’ franchise and even saw his number raised to the rafters in 2018, 30 years after he last suited up for an NHL game. 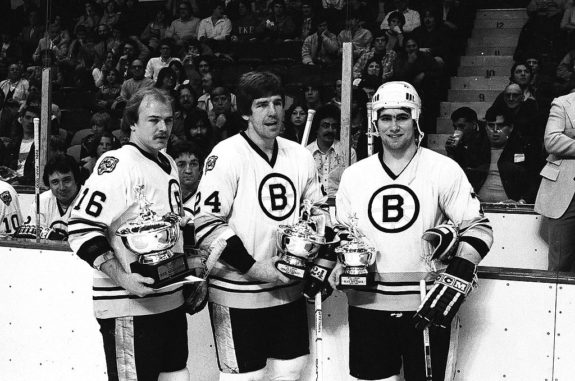 1980: Rick Middleton, Terry O’Reilly and Ray Bourque of the Boston Bruins accept three-star awards in the pre-game ceremony before the game at the Boston Garden. (Photo by Steve Babineau/NHLI via Getty Images)

While Middleton would score at least 20 goals in all but two of his professional seasons (both instances of him failing to reach the mark saw him skate in just 49 games and 59 games respectively), “Nifty” as he was so often described by the Bruins’ faithful would have his most success from 1978-79 until 1983-84 as far as goal-scoring and point production goes.

It’s not every day a team can trade a player like Hodge in a one-for-one deal and come out the clear winner in the transaction. Following his trade to the Rangers, though, Hodge would score just 23 goals and 68 points in two seasons in New York, including two goals and six points in 18 games in 1977-78 as he’d spend the majority of his season in the AHL.

The Bruins were able to reap the best years of both Hodge and Middleton throughout their careers.

The Cam Neely trade is the trade that just keeps on giving for the Bruins.

It may seem crazy, but the Bruins traded away Barry Pederson who had scored 166 goals and an impressive 417 points in 379 games across seven seasons in Boston and actually came out the big-time winners in the deal.

The team would acquire Neely and the Canucks’ first-round pick. That first-round pick would end up being used on Glen Wesley who would later be traded for another three first-round picks from the Hartford Whalers. While the trade tree would be one of the most convoluted and impressive hauls seen in the history of the NHL, Neely alone was well worth the return for the Bruins. 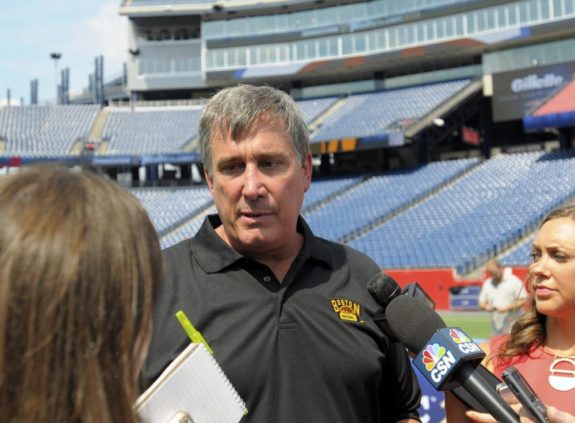 Not only did Neely go on to be one of the most prolific scorers in the history of the Bruins, becoming only the second player to score over 50 goals in multiple seasons for the team, but Pederson would also only score another 72 goals in his career split between the Canucks, Pittsburgh Penguins and Hartford Whalers.

Neely had scored a total of 51 goals in his first three NHL seasons prior to the trade. He’d score another 344 goals in 525 games in Boston before ultimately becoming the team’s President.

Perhaps the most impressive feat that Neely accomplished in the NHL came during the 1993-94 season when he’d score 50 goals in 44 games.

The trade would continue to haunt the Canucks decades later when Neely as the team’s president and Milan Lucic, one of the many pieces recouped as a result of the original trade tree, would win the Stanley Cup in 2011 against Vancouver.