Earlier this week, we matched the Boston Bruins with the St. Louis Blues as potential trade partners this deadline season. Today, we will take a look at one of the biggest potential sellers in the east in the New York Rangers. The Rangers have fully embraced the rebuild, and will be heading to their second straight deadline looking to sell off assets.

The Rangers did well a season ago, shipping Rick Nash to the Bruins for a haul that included the Bruins’ first-round pick and Michael Grabner to the New Jersey Devils for their second-round pick and a prospect. One might argue that this time around, the Rangers have more assets to dangle and more reason to sell. There are a number of veteran players who are pending free agents or who have a season to go on their deals on the roster who could be appealing for teams prior to the deadline.

After hiring David Quinn to coach the team this summer, Ranger GM Jeff Gorton firmly committed to a rebuild. After years of chasing the Cup, the Rangers finally accepted the fact that the window was closed and that it was time to bring the next wave along. En route to missing the playoffs a season ago, the Rangers dumped Nash, Grabner and defender Ryan McDonagh for a plethora of picks and prospects that started to rebuild a barren system.

The Rangers showed signs of life this season, with strong underlying numbers leading to a nice stretch of results after a sluggish start. The losses have started to pile up, however, and the Rangers are falling out of the playoff race quickly. They aren’t winning the Cup this season and appear destined to sell pieces once again for picks and prospects. With young talent starting to push through from the AHL’s Hartford Wolf Pack, the Rangers will need roster space to allow these young players to develop at the NHL level late this season.

Pending free agents Kevin Hayes, Mats Zuccarello and Adam McQuaid could be appealing pieces to contending teams, while guys like Chris Kreider, Jesper Fast and Jimmy Vesey have a year left on their contracts but could be appealing trade chips too. There are options for Gorton as he takes the next step in his rebuilding plan.

Don’t worry, this won’t be a Jimmy Hayes 2.0 situation for the Bruins. Kevin Hayes has established himself as a strong top-nine forward in the NHL and could give the Bruins a perfect third center behind Patrice Bergeron and David Krejci. Hayes, who is a free agent on July 1, represents arguably the best rental option for the Bruins this deadline season. He’s a local boy with offensive flare and would fill a major hole in the lineup.

Hayes, who has 33 points in 39 games this season, is averaging 19:26 per game for the Rangers while managing positive possession numbers. At just 26, he isn’t out of gas by any stretch and could even be a long-term solution if he’s willing to take a hometown discount to stick in Boston after the season. After all, the Dorchester, Massachusetts native could be a hero in this town if he comes back and makes a positive impact.

This is a player that brings a typical Bruin mix to the table. He’s big (6-foot-5, 215 pounds), has decent two-way ability and isn’t afraid to mix it up with physical play. His offensive ability and versatility makes him even more appealing, as he could fill the vacant third center spot or play right wing with Krejci and Jake DeBrusk.

In terms of assets out, Hayes is the Rangers’ best trade chip this season, meaning they will likely want a first-round pick for him. Are the Bruins going to be willing to give that up for a rental piece? I’m not quite sure they will after giving one up for Nash last season. That said, Hayes is a pretty solid fit and the Bruins could get creative by dealing one of their prospects along with a lesser draft pick.

Although he shoots left, Mats Zuccarello can play the right wing and could be a nice rental option for the Bruins on a line with Krejci and DeBrusk. After a slow start to the season, Zuccarello has rebounded quite nicely and is starting to post numbers. He admitted to Larry Brooks recently that the trade talk was impacting his game, and one has to think that when his future is settled his performance will return to career norms.

Zuccarello still has 21 points in 33 games this season and has lit the lamp seven times for the Rangers. At 31, he’s likely seen his best days go by, but Norway’s finest is still a productive player with a few seasons left to run. I’m not sure I would invest in him moving forward, but I firmly believe that he would help a contending team this spring. 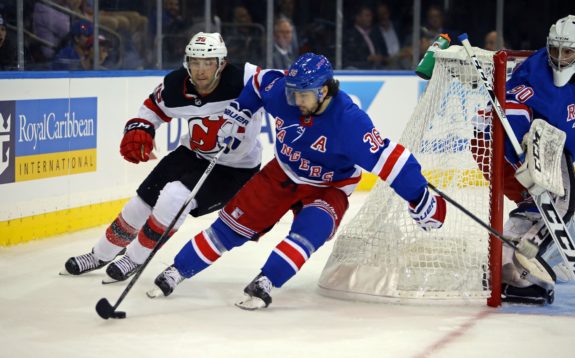 Zuccarello is a strong passer who has an underrated amount of skill in his game. He was always overshadowed by the big dogs with the Rangers, but he was always a strong contributor with the club during their best seasons. Although he doesn’t bring the physical element that Bruin fans love, he does bring a ton of speed to the table, which could benefit the Bruins when they eventually meet teams like the Toronto Maple Leafs and Tampa Bay Lightning in the playoffs.

A Deal To Be Made?

After the Blues, I think the Rangers are the best bet for the Bruins to target this deadline season. There is no doubt that the Rangers will be selling, and they have a number of players who would help the Bruins. I can’t help but think that Hayes makes the most sense as an individual target in the league outside of Brayden Schenn. Like Schenn, Hayes can plug multiple holes and adds another weapon to a Bruin offense that will need it against the Leafs and Bolts.

Zuccarello may only cost a second and a prospect and could be a nice backup plan should the Bruins decide they don’t want to pay a premium for help this deadline season. Kreider, who we didn’t touch on in-depth because I’m not sure he’s the best fit for the Bruins, could be a target as well for the club. There is a plethora of options here for contenders, and that makes the Rangers a team to watch when it comes to Bruin trade talks in the next month.